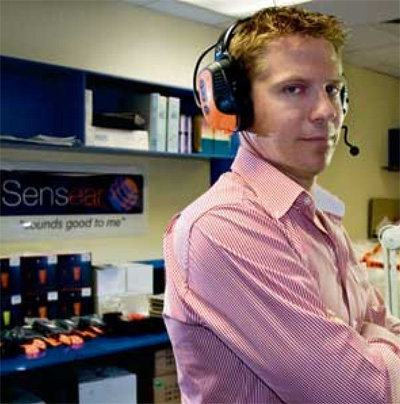 REPRESENTATIVES from equipment manufacturer Sensear are in California this week aiming to enhance the company's global presence and increase its market share in the US's $3 billion safety and protective devices market.

The Crawley-based hearing protection and communication enhancement company is participating in the third annual Innovation Shootout, as part of the popular G'day USA campaign, which is now in its sixth year of promoting everything Australian.

In two separate 'shootouts', Sensear will compete against five other innovative companies from around Australia seeking to build awareness and attract capital for future growth of their respective product lines.

The first shootout in Los Angeles is targeted at venture capital investors, while the second in Silicon Valley will involve a panel of judges rating each business based on the uniqueness of their
technology, and their potential for success in the US.

Sensear chief executive Justin Miller is looking forward to the contest after launching the company's first product in the US in May last year.

"It was an earplug version of the product which allows communication in high-noise environments while retaining hearing protection," Mr Miller said.

"And we've just released our earmuff version of the product to the US market in December."

While Mr Miller admits it's still very early days in terms of global success, he is quietly confident about the company's future at home and abroad.

"It has taken some time to educate the market, but that said we do have some large customers in the US such as Boeing," Mr Miller told WA Business News.

"With anything, people start with small purchases and then move up into reorders, which is now where the business is starting to get itself and customers of the likes of Alcoa and Qantas are into fairly substantial reorders.

"I think that's significant because what we're addressing is a major problem within the industry and I think importantly what it highlights is that we're actually a business for this new economy, which is a downward turning economy."

And Mr Miller anticipates significant increases in infrastructure will ensure success for Sensear.

"Whether it's [Kevin] Rudd or [Barack] Obama or the Chinese, everyone is talking infrastructure, about ways to provide an economic stimulus," he said.

"Infrastructure means noise and our products support that."

An order book for the first quarter of 2009 already ahead of the sales for the whole of 2008 indicates Mr Miller's measures to overcome teething problems, such as proving himself to 'invaluable' safety distributors, have been successful. "Safety products are sold through safety distributors worldwide, so they hold control of the end users, and we've got a product that's not necessarily suited to a catalogue, it's a consultative type sell," he said.

"We started with some pretty significant presence at some major trade shows around the world...and we hired some sales people with relationships and used those.

"Significantly, the chairman of our board is ex-Wes farmers, which is the world's fourth largest safety
distributor, so a lot of experience and contacts that came with that."

Founded in 2006 in Perth, Australia, and with joint headquarters in Perth, and San Francisco, USA, Sensear is a world leader in the development and manufacture of high noise communication headsets. From a global network of sales ofces Sensear is selling to end users via distributors, dealers and resellers in the majority of countries around the world. Sensear’s patented combination of hardware and software, isolates, cleans and packages speech while suppressing background noise to a safe level.The award winning technology has been incorporated into both ear plug and ear muf headsets that, whilst retaining situational awareness, enable face to face, mobile/cell phone, short range and two way radio communication in the harshest and noisiest of environments.